I’m currently studying for the new Microsoft Certified Solutions Expert: Server Infrastructure (MCSE: SI) certification.  A couple of my current certs are upgradeable to this so apparently I only need to pass 70-413, and 70-414, and 70-417.  Luckily I received an invitation email to take certain beta exams for free (hint: create or update a MS Learning SME Profile), though this means I have to focus on studying for a couple weeks to have much chance at passing.

Currently I’m using the Server 2012 RC (build 8400).  Ideally I would install Server 2012 directly on a physical server to lab Hyper-V, but for now I’m running it on a VMware ESXi 5 host.  Here are my impressions thus far along with a few tips.

This VMware KB article has useful tips:
Windows 8 operating system does not boot or install on ESXi or ESX. 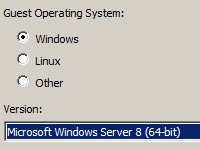 Server 2012 will install and run when you create a new “Windows Server 8” VM.  VMware Tools can be installed and seems to work properly.  The KB says “vmxnet3 virtual NIC does not work”, however, it is working fine for me so far.  I currently have five VMs running Server 2012 RC, all with VMXNET 3 network adapters.

The main issues I’ve found so far have been related to the video driver.  When you create the VM and install VMware Tools, a Microsoft driver is used for the video adapter. 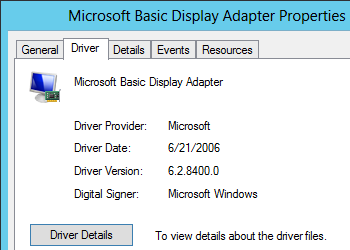 This works but you get a “laggy” mouse as a side-effect when accessing the VM console through vSphere Client.  I’ve seen the same symptoms with fully supported Windows versions when using the Microsoft video driver, and the solution was to use the VMware WDDM driver.  Unfortunately, if you manually configure the video card to use the WDDM driver in the Server 2012 VM, you will get the “black screen” mentioned in the KB.

The KB suggests enabling 3D support for the video card in the VM settings, but you cannot do this when the VM is set to Server 8 in the VM options.  Instead, temporarily set it to Windows 7 or manually edit the VMX file for the VM (mks.enable3d = “TRUE”).  This does at least get the video working with the WDDM driver, and the mouse is not laggy, but I’m having problems with the mouse cursor not displaying correctly or at all.  It seems that enabling 3D and switching to the WDDM driver is worth a shot but might not work correctly yet.  The video driver doesn’t affect the mouse when accessing the VM over RDP.

Another issue in the KB that seems to be resolved is an apparent failure to detect (virtual) hardware changes.  The KB suggests using the “shutdown” command with the “/full” switch before making such changes, however, in the RC this switch doesn’t exist.  The shutdown help mentions a “/hybrid” switch to use the new hibernate-shutdown feature, so maybe the default is now to do a full shutdown.

UPDATE 11/23: Full support for Server 2012 has been added in more recent vSphere versions.  The KB article linked above has the details but basically vSphere 4.x won’t ever support Server 2012, while support has been added in vSphere 5.0u1, 5.1, and 5.5.  To learn the ins and outs of vSphere I highly recommend Mastering VMware vSphere 5 from Sybex, or the recently updated Mastering VMware vSphere 5.5.  I found this series helpful to prepare for the VCP 4 and 5 and it is definitely a must-read for anyone working with vSphere.